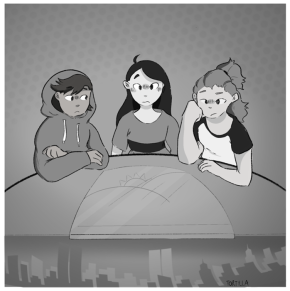 The Land Down Under is a Undum game by The Marino Family.

This is the fifth installment of a series called Mrs Wobbles and the Tangerine House, which I have not previously played. The game seems to be standalone, though, with no obligation to play the first four games before playing this one. Lin, an adopted girl whose perspective the player takes, is introduced to Peter and Wanda, the newest arrivals to the Wobbles household. While looking for them to have breakfast with, Lin follows a trail of drool into the basement, where she finds a door that leads to a land she has caught glimpses of on the floor above, through a glass panel that looks down into the land. The citizens of this land, the eponymous Land Down Under, are paper-thin, and move by sitting in conveyor belts called tracks that take them to wherever they need to be throughout the day. Lin finds Wanda (and later Peter), and they soon learn that the tracks are controlled by an evil underwater King who denies his citizens the freedom to move because he has no such autonomy himself. While on a routine visit to the King to pay respects to him, Lin sneaks off to a hidden room and turns off the switch that binds the citizens to the track, ending the King’s power over them. This frees them to prepare a resistance, climaxing in a war between the King and the Queen, who leads it. The Queen wins, but chooses to follow Lin’s advice to talk to the King instead of killing him, changing him back to his original human form. Peace ensues, and the Land Down Under sheds its rigid, monotonous ways.

There are two main conflicts in the story. The first is that faced by the King, who struggles to free himself from the need to inflict misery upon his citizens due to the misery that he himself experiences. This motivation is first mentioned by the Queen, who explains to Lin that the King “can’t move on” and that he “was never free”. There is some ambiguity here — it’s unclear at first if the Queen means the King can’t move on because he won’t or because some external force prevents him from doing so. We only learn later that the first interpretation is true, i.e. the King is in control of his actions. (There’s nothing wrong with this ambiguity since it comes from the Queen, who genuinely believes that the King is incapable of moving on, even though it turns out later that he is.) The fact that the King has agency is definitely a good choice in terms of writing, since attributing his misery and cruelty to some unknown force beyond his control undermines his identity as a villain-slash-victim, making him flat, two-dimensional, and ultimately uncompelling.

This conflict is resolved when the Queen’s forces strike down the King, urging her to go to his side and take him in her arms, shedding tears of sadness that things had to end this way. This act of love transforms the King, previously a basilisk, into his original human form, at which point Lin, whose point of view we follow, chooses to leave, though we later learn that the King changed his ways. I think this resolution is a little rushed, specifically with regard to the change in attitude of the Queen towards her former husband. Although her embrace of the King, and his acceptance of it, are validated by the grace she is said to radiate (as well as by his weakened state), the buildup to this embrace is not so well substantiated, particularly since the Queen’s last remark on the King, in response to Lin’s advice to talk to him, was “I think it is too late for that”. The only hints that the Queen feels differently are her refusal to look Lin in the eyes when she talks about him, and Lin’s observation that “something in her eyes made Lin think she was in pain or unhappy”. If the Queen had expressed something like guilt when Lin advised her to talk to the King, her change in stance might have been more natural.

The second conflict is that between Lin and Wanda, who makes fun of the crooked smile Lin has due to Bell’s palsy. It initially seems that Wanda bullies Lin because Lin refuses to let her into the basement, but we learn later that Wanda does so because she wants to divert attention from her brother Peter’s drooling, which Peter is worried will cause him to be bullied, as he confides in her one night. She therefore plans to make herself an even bigger target by actively being mean to those around her, shielding Peter from whatever acts of retaliation aimed otherwise at him. This justification is a strong one, and I especially like that it parallels the reason for the King’s cruelty. Ultimately, both Wanda and the King are cruel because they are misguided — Wanda wrongly believes that she should fight fire with fire, and the King wrongly believes that perfection and regularity are universally desirable (and that he will feel better by spreading his misery to others). Knowing that both Wanda and the King are victims rather than perpetuators of evil is heartwarming as well as accurate — many evildoers, after all, are merely ignorant of the pettiness of their actions.

The other link between these two conflicts is of course the idea that imperfection should be embraced rather than condemned. The name “Mrs Wobbles” seems significant in this regard, particularly since she visited Lin in a dream to urge her to keep her eyes and ears open (and perhaps turned a blind eye to her descent into the basement in the first place, allowing her to experience the events that taught her the value of imperfection). Besides Wanda and the King, Peter also grasps this lesson in his own way, when his unwillingness to break free of the comforting regularity of an easy lifestyle leads to his deterioration. He doesn’t reflect on his experience afterwards, but his silence can be interpreted as a sign of his reluctance to talk about it with Lin and Wanda, precisely because it affected him so deeply. The way the lesson learnt by the people of the Land Down Under is directly relevant to Mrs Wobbles’ children is something I really like, particularly since it gives the story a satisfying closure.