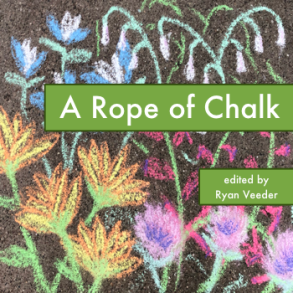 A Rope of Chalk is a parser game by Ryan Veeder.

There are four acts in the game, corresponding to each of the four characters whose perspective the player takes for each act. Lane, Alec and Hina organise a sidewalk chalk tournament with the help of Nathalie, whose role as the hydration officer is to make rounds with her portable water cooler and ensure that everyone participating stays well hydrated. The first conflict arises when one of the participants draws an explicit image of a succubus, causing Lane to faint in horror, or so the other judges think. Acting on this assumption, Alec takes a bucket of water to the offending entry with the intention of erasing it, but he, too, faints in the process and accidentally spills water over the drawing of another participant. (This summary continues in the next paragraph.)

Now playing as Nathalie, we learn that she once organised a sand sculpture tournament as part of the same Honors arts event that no one enjoyed, because sculpting with sand was difficult, expensive and dangerous. Hina, whom Nathalie has a conversation with, had the unfortunate task of being the judges’ representative and confronting Nathalie, who took the criticism personally, and moreover, as something Hina took pleasure in delivering. In the fourth and final act, playing as a drugged Hina, we learn through a delusion of her mind that Nathalie volunteered to be the hydration officer for the sole purpose of spiking the water with Episcophacetin, the drug that was in fact responsible for the fainting incidents of all the judges. Navigating through the world of her mind, which instructs her to find water to dilute the drug in her body, Hina eventually faces Nathalie, who affirms her purpose of dragging Hina into the pits of misery that she is herself in. Exerting all her willpower, Hina throws sand at Nathalie and distracts her long enough to access the water she needs, regaining consciousness and putting an end to Nathalie’s evil schemes.

There are two main reasons, in my opinion, for the use of multiple perspectives to tell the story. First and more importantly, as the narrator emphasises at the start of the game, he was never at the scene and has to therefore piece together what happened from the firsthand accounts of the individuals who were. As the player is literally put into the shoes of each character, there is also the effect of forcing the player to experience the story from each character’s point of view, including that of Nathalie, the evildoer. This reinforces the narrator’s proclaimed goal of representing the events in the story in as truthful a manner as possible while also highlighting the narrator’s desire to humanise Nathalie, particularly since Nathalie’s account of the story, as we learn through a letter in the epilogue, was something the narrator explicitly requested from Nathalie herself (as opposed to a criminal account that was forced out of her, or one that was otherwise fabricated against her wishes). The portrayal of Nathalie as both a villain and a victim gives her depth as a character, particularly in the context of her abuse of drugs, which often blurs the lines of agency. On this point, however, the narrator’s noticeable lack of comment, coupled with his clear efforts to help Nathalie, seems to imply that it doesn’t matter if Nathalie was ever in control of her drug abuse. Rather, what matters is that she is recovering.

The key conflict in the story is that between Hina and Nathalie, whose motivations we learn almost entirely from their points of view, especially from Hina’s. The use of Nega-Hina as the main source of information for both Hina and the player can be seen as something of a deus ex machina, but I think it’s congruous with one of the points mentioned by Nega-Hina herself, namely that Hina subconsciously absorbed the details of her friend Jonathan’s novel, allowing it to form the setting of the world she experiences. In the same way that her mind was able to capture information without her knowing, it’s possible for it to process information for its own benefit, just like how we can attain higher levels of clarity by dreaming, which is, in a sense, precisely what drug-induced Hina is doing. In fact, far from shying away from the omniscience of Nega-Hina, the author embraces it as a means of helping the player solve the final puzzle, which is in line with the identity of Nega-Hina as the mysterious, spontaneous part of Hina’s mind.

As for the motivation itself, it’s unclear exactly which aspect of Hina Nathalie takes issue with — what exactly Nathalie means when she criticises Hina’s “pathological need to be in control” — but this very ambiguity is again justified by Nathalie’s drug abuse, which can be understood to have distorted her thinking, amplifying her resentment towards Hina beyond reason and reasonable amounts. Seen in this light, the role of drugs comes into question. On one hand, drugs merely amplified, rather than caused, Nathalie’s resentment, which can be traced to a valid perception of Hina’s viciousness, and the delight she seemed to take in seeing Nathalie’s hopes dashed. On the other hand, if not for drugs, it’s unlikely that Nathalie would have felt the inhuman amounts of rage that were directly responsible for the intricacy and cunning of her schemes. There is no resolution on this end, but as mentioned, it may be that a resolution is unnecessary. Whether drugs were instrumental, or merely auxiliary, or somewhere in between, they are out of Nathalie’s life now, and that’s ultimately all that matters.